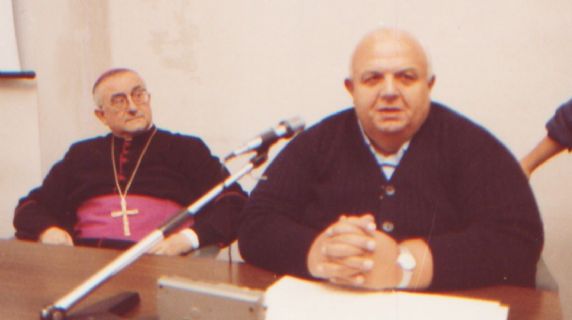 Enrico Manfredini was born in Suzzara (Mantua) on January 20th 1922.
As a young boy he moved with his family to Milan and in 1934 he went to Seminary school. On May 26th 1945 he was ordained priest.
Curate in Monza first and then in Lambrate, he graduated in philosophy at the Università Cattolica del Sacro Cuore in 1951. He was diocesan Assistant of Azione Cattolica's men until 1958, when he became the Archibishop's delegate for the entire Azione Cattolica. In 1963 Cardinal Montini nominated him Provost of St.Vittore in Varese. Invested on that role, he was admitted at the Second Vatican Council as "auditor priest".
On October 4th 1969, Pope Paul VI nominated him Bishop of Piacenza and for 13 years he  pursued a very intense pastoral activity in his Diocese.
His pastoral action was characterized not only by the care for the family and the cultural world, but also by its universalist philosophy: he promoted numerous initiatives and sustained collaboration movements with missions and with the developing countries, especially in Africa and Latin America. He felt the urge to testify Christ's love to poor people and to announce the name of salvation to faraway countries.
On March 18th 1983, Pope John Paul II entrusted him with the pastoral cure of the Archdiocese of Bologna. In a few months, he gained the trust and respect of those who met him, especially of the youths, who saw in him "a new man".
On December 16th 1983 he died suddenly after a heart attack.