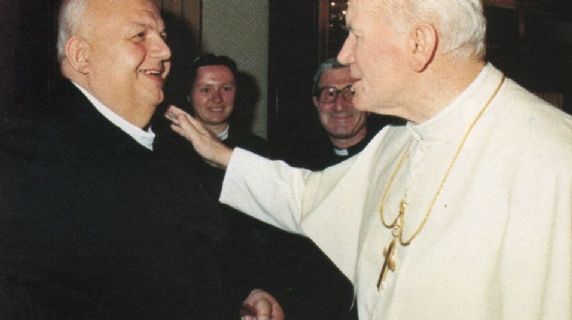 In 1972, when travels began in Uganda and other neighboring countries in eastern Africa, no one would have imagined that a movement that can boast more than 40 years of life could emerge from the emergence of Catholic missions. It was winter when Vittorio Pastori, along with other people, left for Uganda to visit two bishops of mons. Enrico Manfredini, at the time leading the diocese of Piacenza-Bobbio: Msgr. Cyprian Kihangire at Gulu and Mgr. Caesar Asylums in Lira. From that journey, in the heart of Victoria, the idea of ​​an association that convey groups of people at the Missions was born, in order to realize the work and life of the Missionaries. With his tenacity, courage and unmistakable faith, Vittorio Pastori led Africa Mission until his death on 2 September 1994. To understand the originality of this project, the bishop of Piacenza, Mgr. Manfredini, of whom Victorian was an administrative secretary. If the latter had placed his heart in proportion to his exceptional pledge, Msgr. Manfredini brought the contribution of his love for the Church, coupled with the will to implement the decrees of Vatican Council II. In fact, he thought of a fraternity of Christian laity who could, with maturity of faith, take on their responsibility in a path of ecclesial communion aimed at realizing the universal vocation to holiness. Since its establishment, Africa Mission has chosen to be present among the African communities - and particularly in Uganda - for the promotion of development, support for missionaries, local clergy and lay organizations. Since 1984, through the operational arm of the NGO Cooperation and Development, field projects have been carried out with the use of specialized personnel and tools, but there is an important part of our activity that can not be framed in a scheme: it is All the initiatives that take shape in giving our homes, paying attention to the other, to demonstrate the availability of our volunteers, our resources and facilities - in fact and with the little big gestures of each day.
You do not know who will knock at your door, nor what joy or sorrow brings to your heart. Do not you know if you can help him concretely, if you can give him the fleeting and intense happiness of drinking a glass of water, if you can not do anything but give him some time to listen to his story.
Whatever the intervention you will be required, however, is a great intervention, because it is not only a sign of personal generosity but of the dedication of that home created, of those who have worked to keep it operational and of those who, with their commitment, That it is still open.