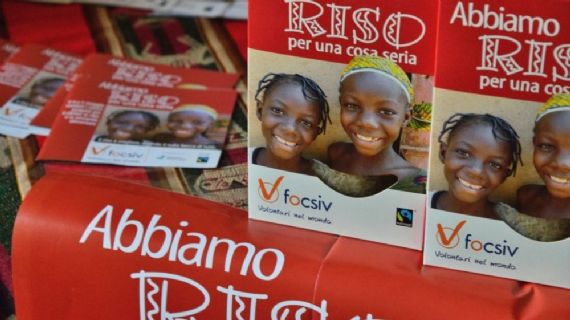 Rice is the most consumed food in the whole world, especially among poor people, and it grows in almost all countries. Rice is the protagonist of this campaign, meant to promote the right to food and dignity for those who cultivate the land. The box of 100% Italian RICE, produced by the Italian Agricultural Supply Chain, represents the alliance between FOCSIV and Coldiretti (federation of Italian farmers), but mostly between Italian farmers and growers of the Southern countries, both influenced by the decisions imposed by agribusiness.
The distribution of this rice gives every year a significant contribution and a great message: on one side, it supports Italian family farms giving value to their product although sold below the standardised cost; on the other hand, it supports numerous interventions in the poorest areas through the projects of FOCSIV members.
Family farming frees the citizens and consumers from the slavery imposed by agri-food multinationals and by the hungers of millions of people; safeguarding different countries and people's biodiversity, culture and crops, in full respect and care of Creation.
Since 2006 Africa Mission – Co-operation and Development has taken part in this campaign, by offering rice boxes in different squares throughout Italy. In the past, the proceeds helped to support the multi-sectoral centre in Loputuk project (link to the project); since 2017, the campaign is linked to the "Right to Food" project  through  the agro-pastoral training and the promotion of micro- entrepreneurship in Karamoja.