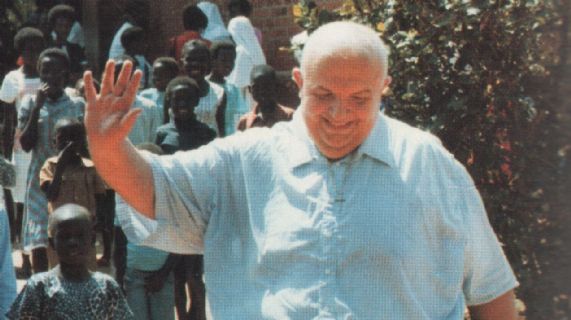 Vittorio Pastori was born on April 15th 1926 in Varese, Lombardy.
In the early 1950s, Vittorio Pastori opened in his city a renowned restaurant, devoting himself to a thriving commercial activity that kept him busy for 15 years. It's here, in Varese, that Vittorio met mons. Enrico Manfredini in 1966, who handed him the task of Administrator of the Basilica, as well as the responsibility of Diocesan Typography and parish works.
The friendship between the two had been strengthening over the years, so much that in 1969 Mons. Manfredini, designated Bishop of Piacenza, invited Don Vittorio to follow him: the restaurateur accepted enthusiastically, quitting his business activity to fulfill the role of Administrative Secretary of Bishop's canteen, Seminary Treasurer, and Director of a home of spiritual exercises.
In this period, he met a certain number of African Bishops. He then visited Uganda, Kenya, Tanzania and other countries in the Sub-Saharan continent, being deeply affected by local people's life conditions and by the work carried out by the Catholic Church and its operators (friars, nuns, doctors, volunteers).
His awareness turned into instant anxiety to materially help these people, educating  Italians on the reality of these areas and by raising finance as well as in-kind resources (ploughs, tractors and mechanical, agricultural and medical tools) and shipping them from Italy to Uganda.
In 1972, he founded with some friends the association AFRICA MISSION and continued his activity of "charity commuter" between  Italy and Africa. At the same time, he founded together with Honorable Giulio Andreotti and Mons. Enrico Manfredini the "Friends of Uganda Committee", based in Piacenza. Massive help was being brought to Africa, by all the shipments, whether they were made by air or by sea.
In 1982 "COOPERATION AND DEVELOPMENT" is founded. With its professional technicians it started drilling new drinking-water wells, and fixing those already existing.
On December 16th 1983 Mons. Manfredini suddenly died in Bologna. A hard and bitter experience for Vittorio, who, however, continued his work and fulfilled a deep and long awaited desire: on September 15th 1984 Vittorio Pastori is ordained Priest by HE Mons. Cipriano Kihangire, Bishop of Gulu.

"Poor people can't wait. The hungry are hungry right now". As a priest, DonVittorio carried on his mission at the service of the hungry and the outcasts, especially in the Third World, without separating spiritual and material aspects. As and when needed, DonVittorio spent long periods in Uganda, coming back to Italy to Christian communities and groups.

Until 1988, he had travelled 137 times to Africa: here he met President Museweni and Mother Teresa of Calcutta, with whom he started a bridge of solidarity. In the meantime, he inaugurated in Moroto "the Citadel of charity", that will after be dedicated to his memory in front of the president of Ugandan Episcopal Conference Mons. Emmanuel Wamala and the Apostolic Nuncio Mons. Rauber